Have you heard? 📣 We released a full-feature implemented auth server built on Spring-Boot 2. State-of-the-art OAuth2 provider and on top of that - fully open sourced! 🎉🛠

Go check out the blog post and then the repository as well! Happy hacking! 💻

In the previous part of this series, we created a tiny API in Spring Boot which exposes people entities over REST. There are usually many resources with (sometimes quite complicated) relationships between each other in a typical web application. In this part, we are going to examine how such relationships can be easily implemented in Spring Boot and Hibernate.

We are going to continue with the project we created last time. If you do not have it and would like to follow this tutorial, you can download it here or get the final result instead.

The good thing is that no additional dependencies are needed since we already have JPA (which contains Hibernate) in the project so we can jump straight into coding.

We will introduce some new entities in our application to make the schema a bit more complex. Let’s say that our application will provide information about people going to various parties where each person will have some set of skills. The data model will looks as follows: 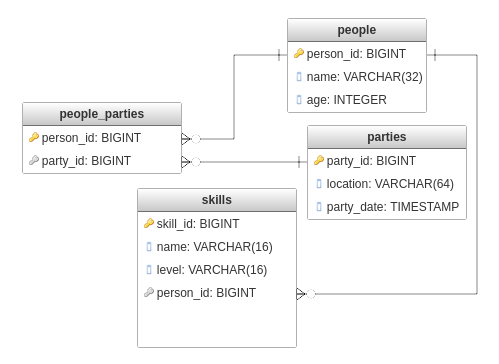 Let’s start by updating our schema.sql:

The first relationship we will take a look at is a type one-to-many. In other words, one entity will have a reference to many entities of certain type. As described in the diagram above, we can see that each person has a set of skills. In this case, the skill entity is the owner of the relationship since it contains the link to its person.

We can handle this case in JPA by simply putting this reference in the Person.java:

We also have to create the Skill.java object for the skill entity and put the necessary mappings in there as well:

Furthemore, we specified a level for each skill which is an enum value (to have a predefined set of values instead of random “magical” values). Let’s go ahead and create it in Level.java:

There are several things worth explaining in the code we just created. First of all, as mentioned above, we are going to limit the set of values for each skill level by using an enum. There are two ways how to map enums from database to POJOs:

The first one will require to save strings that match our enum values to the database (eg. ‘GOOD’) whereas the second one uses integer values matching the position in our enum list (eg. 0 would refer to GOOD). There are pros and cons for both approaches but I would personally prefer EnumType.STRING since an addition of some additional new value would not corrupt the existing data. In contrast, if we prepend POOR to the list and use EnumType.ORDINAL, all our database entries will get out of sync.

Second thing to notice is the @JoinColumn annotation, where we specify the name of the column that contains the mapped object’s foreign key. Since Skill is the owner of this relationship, the mapping is done here. In the Person object, we simply specify where its foreign key is stored using @OneToMany(mappedBy = 'person').

Lastly, we put @JsonBackReference on the person reference in the Skill object. When exposing these resources via REST, we need to avoid recursive relationships in JSON and without this annotation (or @JsonIgnore) we would create an infinite loop of nested objects in our response. This annotation basically says that a person will not be part of the JSON returned for skill (but each person will contain list of its skills in the response). If the person was a part of the list then the program would fetch the person’s skills, which would then make the program fetch the person again and again until we’d get a StackOverflowException.

Next relationship we are going to model is many-to-many. People will be linked to various parties that they will/did attend - one person can go to multiple parties and each party can have multiple visitors. In our SQL script, we have to model this relationship using a relationship table called people_parties:

Again, we have to create the object for a party in Party.java:

and also add this mapping to Person.java:

The relationship table is mapped to our objects using @JoinTable annotation. The name of this table has to be specified along with joinColumns (mapping for composite foreign keys) and optionally inverseJoinColumns (the foreign key columns of the join table that reference the primary table of the entity that does not own the association).

And finally, if we are going to expose these entities via REST, we need to avoid the infinite recursion in the JSON responses here as well. We’ll accomplish that by putting @JsonBackReference on one side of the relationship. In this case, all responses for parties will also include people in them but not vice versa.

The application should now compile but parties are not yet publicly exposed. In order to do that, we first need to create repository for them (same way we did in the first part):

and also create a controller:

Let’s also pre-populate our database with some data to test our new service. We can do this in our data.sql:

Notice, that people are part of each party in the JSON response:

It does not work vice versa for the /people endpoint since we added the @JsonBackReference but we can implement a separate endpoint for accessing parties for a given person:

In this part of the Spring Boot REST API series, we covered how to specify one-to-many and many-to-many relationship between our entities in order to demonstrate how to expose some more complex data via REST. The purpose of this post was to give a higher level tutorial for this topic rather than to examine in-depth JPA and Hibernate capabilities. The resulting service we just created can be donwloaded from Github. Feel free to use it as a starting position for your next project, because it’s published under Apache License 2.0.

Instead of writing our own controllers, we could make use of spring-boot-data-rest starter which converts all JPA repositories into a fully functional RESTful API with responses in HAL/JSON. However, we implemented the controllers manually to demonstrate how to work with them and we will continue to use them in the following parts of this series. If you need a guide for using spring-boot-data-rest you can find it in official resources.